The Remittance Community Task Force (RCTF) was launched by IFAD, through its Financing Facility for Remittances (FFR), on 24 March 2020, in response to the call by the UN Secretary General for global solidarity. In that call, the Secretary General noted that “remittances are a lifeline in the developing world”.

The priority of this Task Force is to develop a coordinated and concerted effort to raise awareness of the impact of the COVID-19 pandemic on the ONE BILLION people on earth directly involved in remittances.

National remittances task forces (NRTF) were also launched in April in The Gambia, Ghana and Senegal.  They saw the participation of more than  100 members from all sectors in the three countries. While seeking to have a national perspective on the impact of the crisis, the NRTFs are bringing in the expertise of the RCTF to identify key actions addressing their national realities. 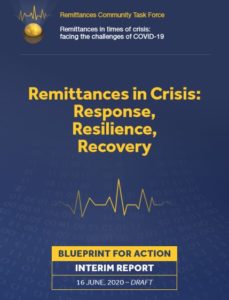 The Blueprint for Action, developed as a collaborative effort of RCTF members, showcases a preliminary set of immediate and short-term measures to be considered by public authorities, the private sector and civil society as part of their collective efforts to facilitate fast, cheap and safe remittance flows during the post-COVID-19 crisis and its aftermath.

The Reference group organizations that have been following the process and providing guidance to technical teams are:

The Remittance Community Task Force is providing regular updated information concerning the challenges facing remittance families during the COVID-19 crisis through its Briefs and Must Read, which are listed below: